Thanks Fiona Mcleod and Danielle Woods for a great discussion!

As Labor picks over the entrails of its defeat, many are slamming their failure to weave their multitude of initiatives into a simple story people could relate to. But this isn’t a failure of marketing but a much deeper intellectual failure of the movement.

Labor’s crisis is occurring on two fronts. Firstly Labor don’t have a coherent view of the economy that enables the celebration of productive elements of capitalism while deriding the exploitative elements. It struggles to articulate support for a productive strong economy at the same time as giving voice to many ordinary people’s day to day experiences of feeling squeezed or powerless.

Secondly they don’t have a story that links together all the various social justice causes around gender, race and the environment. They lack a narrative about the modern world that acts as connective tissue between all these concerns.

However, despite claims to the contrary, this crisis is not due to an impossibly fragmented world made up of competing and incommensurate issues and fragmented constituencies. This disconnect is an intellectual failure rather than a feature of the world.

Anyone looking at the reality of worker exploitation in this country knows it is not a separate issue to gender equality and racial equality. The most vulnerable workers in our economy are non-English speaking women.

The issues of economic exploitation are equally interwoven with the forces damaging our environment. The forces that are driving the exploitation of farm workers and fruit pickers are the same forces driving the destruction of the Murray Darling Basin.

The crisis of the left is an intellectual failure to have its own account of how the economy works which links up these various manifestations of power and exploitation.

So where do we begin in addressing such an intellectual failure?

I think that a powerful first step is that progressives need to change the visual we use to imagine the economy. The simple visuals we have of complex systems are incredibly important. The visuals we use focus our attention on some aspects of complex phenomena and obfuscate others. They shine a spotlight on some issues, and throw other issues into darkness.

I want to argue that the image that progressives discussions of the economy need to focus on visuals of long production and supply chains, rather than the common vision of markets as intersecting demand and supply curves.

The benefits of the visual of the long production and supply chains is that it enables us to visualize the best and worst of capitalism in one image.

The great strength of capitalism is the way it  encourages entrepreneurs to construct chains that meet consumer wants.

The pursuit of profit provides a powerful co-ordinating mechanism that makes modern economies work. The wealth of modern economies is built on the productivity that comes from us all being incredibly specialized. The economic challenge is how to co-ordinate all these specialized people into producing the goods and services we value.

The pursuit of profit provides a genius solution to this problem. We all signal what we value by what we are prepared to pay for. The entrepreneur hunts around looking for opportunities where the price we are prepared to pay is greater than the costs of bringing together all the specialized people needed to produce it.

It is the most effective decentralized mass social co-ordination mechanism human beings have found. Its highly decentralized character has also made it an important bulwak against tyranny.

However, the great weakness of capitalism is that while it takes great creativity, insight and luck to create new chains that meet new demands. A much easier way of making a profit is to take an existing chain and to simply redistribute wealth along it to yourself. Taking wealth from the weak in the chain doesn’t require any talent, it just requires power.

The reason we are seeing the rise of the one percent and growing inequality, is because neoliberal reforms have made it easier for the powerful to strip the wealth out of their production and supply chains and to redistribute the money to themselves.

We see this happening in production chains within companies as Chief Executives grant themselves enormous payrises while at the same time eroding the pay and conditions of their most vulnerable staff. As an academic, my favourite example is ballooning Vice Chancellor salaries and the rampant exploitation of junior casual teaching staff.

We also see it happening in supply chains.  We see it in the impacts of Coles and Woolworths on the food and agriculture supply chains, its flow through to the treatment of casual workers on farms, and to its impacts on environmental problems like the Murray Darling Basin.

We see it when we stop to notice that low status groups are victims in this process. The female and non-white links in the chain are paid less than others.

Labor’s election post-mortem delivered a mixed message on the party’s key strategic challenge, setting the scene for an ongoing battle within the party over how to balance the views of its inner city and outer urban constituencies.

However the terms of this debate set the scene for a false war and risk distracting the party from finding the solutions to the real challenge it faces,

For the past 30 years Labor has told its traditional constituents that they need to harden up in the face of the realities of a competitive global economy.

But they should extend compassion, empathy and care to non-whites, women, gay people and the environment.

There are sections of the party that think their problems will be solved if they stop preaching care and justice to marginalised groups. But this is a false diagnosis.

Many from Labor’s traditional base aren’t necessarily antagonistic to these groups, as the marriage equality vote showed.

For the traditional base, the real sting is the way that advocacy for compassion for these groups contrasts with the lack of recognition and understanding of their own struggles.

It is the invisibility of their pain that is galling.

A clear central narrative is lacking

The Labor campaign has been criticised for lacking a clear central narrative. But it was more than a marketing failure.

It is an intellectual failure that the modern left doesn’t have a narrative of the economy that gives voice to people’s sense of suffering.

It is timely to reflect on this lack, this week as we mark the 30-year anniversary of the fall of the Berlin wall.

The failure springs from the Left having not intellectually recovered from the collapse of socialism. When socialism proved itself unviable, its critique of the ways that capitalist economies tend towards exploitation was taken down with it.

The Left didn’t go through a process of sorting through the intellectual wreckage and developing a new position.

Instead it embraced its opponents’ account of free markets being efficient and meritocratic. It capitulated completely, taking on its opponents’ ideas in full.

For 30 years, Labor politicians have been telling the punters that they are not educated enough to understand that their free market policies are for their own good.

The difference between the major parties was reduced to Labor being prepared to tax and spend more to improve welfare services like public health and public education.

In the last election Labor was attempting to reclaim its roots by being more progressive than it’s been in a generation.

But it was still caught in the neo-liberal straight jacket.

Labor was still operating off a premise that markets are efficient, and that the only room to manoeuvre is in how you tax and spend.

The progressive impulse was directed at attacking the rich to make them pay more tax to level the playing field.

There wasn’t a narrative about why that wealth might have been unfairly gained, or about the people they were seeking to protect from exploitation.

It didn’t speak to working people’s sense of powerlessness.

For the political old timers, immersed in the detail of Labor’s agenda, they had an instinctive sense of how all their policies connected up.

But there was no narrative that made sense of it all to the ordinary voter.

In the US and the UK, people have reached back to 1970s socialists in political leaders such as Jeremy Corbyn and Bernie Sanders in search of an alternative to the neo-liberal status quo.

It is an indictment on the failure of the intervening generations that is all there is on offer.

Tossing out the intellectual wreckage

The work of picking through the Left’s intellectual wreckage, discarding ideas that have been disproven, and identifying the enduring truths still needs to be done.

The task of re-fashioning the ideas that still hold true into a new narrative that diagnoses contemporary challenges and their solutions is still ahead of us.

Labor will be repeating the same mistakes if it focuses its debate about the election failure on the race and gender equality movements, rather than doing the hard work which is long overdue.

Dr Lindy Edwards is a political analyst from the University of New South Wales and author of several books on Australian politics.

Due to unforeseen circumstances this week’s event with Per Capita at the Wheeler Centre has had to be cancelled. Tickets will be refunded.

Try this link instead!

Listen back to my interview with Phillip Adams re my new book:

Come join me discussing Corporate Power with Emma Dawson. It just so happens Emma was right in the middle of a couple of the case studies the book examines…..should be interesting! 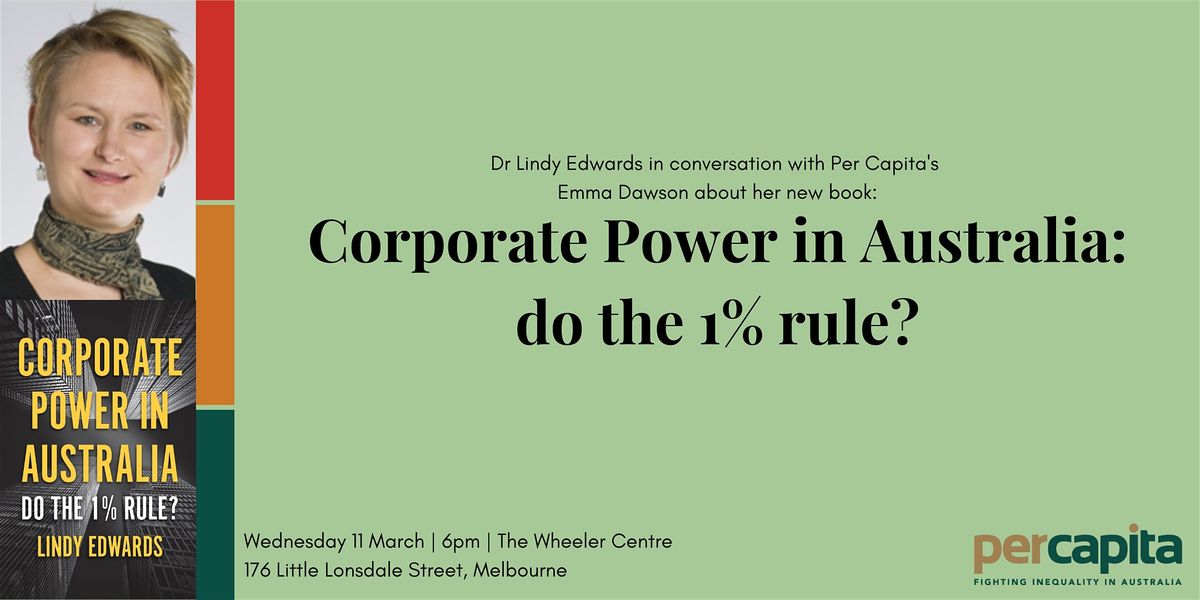